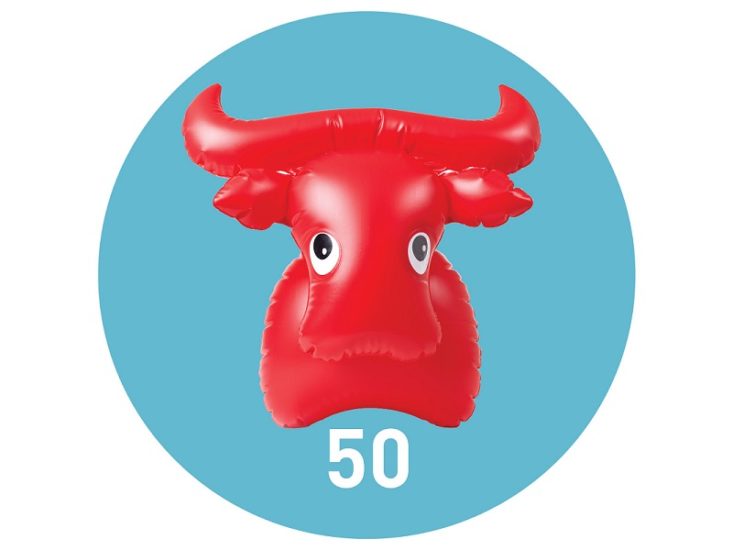 This year, the muscular red BUFFALO will reach a fine age in excellent condition. It is still full of joy and in good condition, just as when it was born. This year, it will turn 50.

In 1971, Libuše Niklová came up with the idea of manufacturing inflatable seating for children in the shape of animals. Her first toys included the red squeaking Buffalo. Further inflatable animal seats were also designed in that year – the Horse, Rhino, Caterpillar, Giraffe, Lion and Polar Bear. However, the road from the design stage to the children was a long one. A prototype was created in 1971, but it then had to be approved by the company committee. The product was subjected to a function test and its popularity was investigated at kindergartens prior to the production of the test series. After undergoing further technical modifications, the toys were first exhibited at Pragoexpo, where they were presented to the wider public. The exhibitions where a number of long-term contracts were concluded were an indicator of the level of interest. The mass production of the Buffalo commenced in 1973 and it was by no means easy.

The production of one buffalo requires 3.4 m2 of film, which is, of course, safe for children. All Fatra toys come with Safe Toy certification. Approximately 860,000 Buffalos were made from 1971. Most were made from red film, but there were also blue, green and black variants. A special version was also made out of transparent film for the purposes of an exhibition.

The buffalo and the other toy seats were made from the 1970s to 2000. There were inflatable animals in every family with children and they became synonymous with Fatra. Unfortunately, cheap Asian competition finished off this product at the end of the century.

Ten years later, the Buffalo was revived upon the occasion of an exhibition by the designer Libuše Niklová and its new era began. The retrospective about the designer started in Zlín and then continued to Prague and Paris. Petr Nikl, Tereza Bruthansová and Zuzana Lednická played the greatest role in the revival of the toys.

In the 1970s, the toy seats were packed in bags printed in four-colours. The toy weighs half a kilogram and this method of packaging was a practical solution for purchasing. The current packaging in a PE bag with an insert, sash and cut-out for hanging in a shelf system provides the option of hanging the toys on a sales stand. The packaging includes a photo depicting the inflated toy compared to the size of a child.

Libuše Niklová designed the Buffalo to engage as many children’s senses as possible. The toy is enormous for a child and it has highly conspicuous moving eyes which are a common element in all the animal seats. They weren’t always black and white; for example, the Lion had black and green eyes and the Caterpillar had yellow and blue eyes. The red of the body is difficult to overlook. The Buffalo squeaks when sat on, it is soft to touch and easy to grasp. The fact that it can be inflated is an advantage for parents.

It is clear why the designer Libuše Niklová has been included among the icons of Czech design. At present, the Buffalo is being produced along with its siblings, specifically the Elephant, Giraffe, Horse, Pig and Caterpillar.